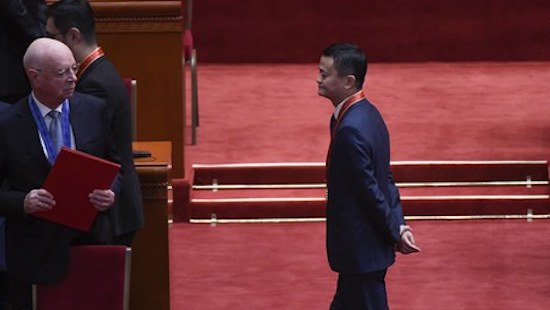 Joyce Huang | Voice of America The recent retirement of Jack Ma, former chairman of the Alibaba Group, has set a positive example in China for entrepreneurs to plan succession, ensuring the long-term sustainability of their businesses, according to some analysts.     But others insist it is still too early to tell if the world’s […]

David Bandurski  |  Hong Kong Free Press In a ceremony in Beijing last week, the director of the Cyberspace Administration of China (CAC), Xu Lin, presided over the inauguration of the China Federation of Internet Societies (CFIS), a broad internet industry grouping whose stated purpose is to “promote the development of Party organizations in the industry.” The federation’s establishment […]

Alex Newman  |  The New American [caption id="attachment_5471" align="alignleft" width="300"] screenshot from Extra Credits YouTube video about Sesame Credit[/caption] In what may be one of the most Orwellian schemes ever concocted by the dictatorship, all 1.3 billion victims of Communist China’s mass-murdering regime will soon be given a “score” apparently measuring, among other attributes, their […]