Support for 270 Million Quitting the Chinese Communist Party: Peaceful Rally Before US Congress

Share on facebook
Facebook
Share on twitter
Twitter
Share on linkedin
LinkedIn
Marking the milestone of 270 million Chinese people who have quit the Chinese Communist Party (CCP), practitioners of the traditional Chinese spiritual practice Falun Gong held a large peaceful rally in front of Capitol Hill for the 18th consecutive year. They also called on the international community to help stop the persecution of Falun Gong in China. 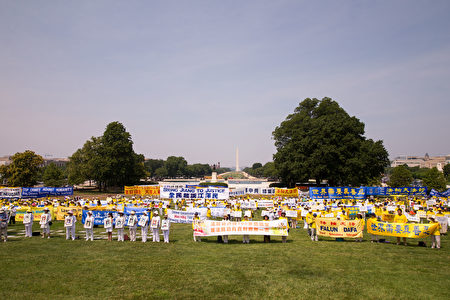 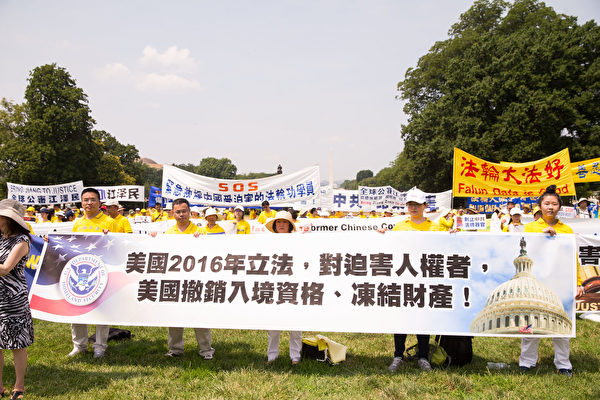 Falun Dafa, also known as Falun Gong, is a spiritual practice that involves living according to truthfulness, compassion, and tolerance, and meditation exercises. The practice became very popular after its public introduction in 1992, with official Chinese state estimates at 70-100 million people practicing Falun Dafa in China in 1999.
Jiang Zemin, General Secretary of the Chinese Communist Party (CCP) between 1989 to 2002, single handedly ordered the nationwide persecution of Falun Gong in China, despite objections from other members of the CCP’s leadership. He established an organization called the 610 Office which overrides the law to execute his personal orders against Falun Gong, to “ruin their reputation, bankrupt them financially, and destroy them physically”.
Mass detentions, brainwashing and forced labor followed. The persecution of Falun Gong began in July 20, 1999 and continues to this day.
To be able to speak up about such issues freely in a public area such as Capitol Hill “is impossible or even unimaginable in China”, according to Wang Dafang, a practitioner of Falun Gong currently residing in California.
At the very beginning of the persecution of Falun Gong in 1999, Wang once openly aired her concerns at Tiananmen Square.
“When I stood in Tiananmen Square and opened a banner in my hand, I was immediately knocked down and arrested. At the police station, I was tortured and attacked by an electric baton until unconscious,” Wang said.

Wang’s sister and brother were illegally detained for practicing Falun Gong.
“I escaped from China, but they were not as lucky,” she said.
Wang’s brother was illegally detained for 12 years and suffered severe torture. He eventually regained his freedom migrated to the United States. However, her sister, Kefei Wang, was persecuted to death after being held for four months.
“I saw her body lying in the morgue of the Jilin Provincial Public Security Hospital, still warm, with eyes wide open … Even today, the authorities still do not allow us to hold a funeral for her,” Wang said.
Xu Dawei was arrested in 2001 for printing materials that clarified the truth of the situation about Falun Gong. He returned home after eight years of torture, and passed away 13 days later. His 16 year old daughter Xu Xinyang hopes everyone can help stop the persecution.
“I lost my father, and his love and care throughout my childhood. I don’t want to see other children lose their parents and become orphans,” she said.

In particular, 10 years of investigation by WOIPFG verified that Jiang Zemin ordered the live organ harvesting of Falun Gong practitioners.
Since 2003, more than 37,505 organizations and 80,792 people involved in the persecution have been registered and investigated by WOIPFG. In live organ harvesting, 9,519 doctors and 891 medical organizations are verified to have been involved, as well as 8,003 people at the 610 Office, and 10,079 CCP officials at the Politics and Law Committee. The list of all individuals and organizations’ names has been submitted to the U.S. government.
“Whoever participated in (the persecution of Falun Gong), must face trials, and bear the moral and legal responsibilities. Surrendering themselves and reporting others’ crimes to atone for their own crimes is the only way out,” Wang said.
278 Million Chinese People Have Withdrawn from the CCP
Tuidang, meaning “Quit the Party” in Chinese, has become the largest grassroots movement in history. Since the publication of the “Nine Commentaries on the Communist Party” by the Chinese-language Epoch Times in 2004, 278 million Chinese people have withdrawn from the CCP and all its affiliated organizations – namely, the Communist Youth League and the Young Pioneers – via written or online statements.
“Quitting the CCP is peacefully disintegrating the CCP,” said Yi Rong, chairperson of the Global Service Center for Quitting the CCP. At present, averagely 100,000 people are announcing the quit of the CCP on the Epochtimes Quitting the CCP Website every day.
According to Yi, this figure demonstrates that people from all walks of life are showing conviction in pursuing freedom, civilization, and progress.
“[Withdrawing from the CCP] is the people’s choice not to cooperate with the evil, and is to lift the harmful pledge that they made to the CCP,” Yi added.

Yi encouraged Chinese who are holding a “wait and see” attitude towards the Chinese regime, who have not quit the Party, to quit now.
“Please seize this fleeting opportunity to completely shake off your fears, to quit the CCP and choose a better future for yourselves and the Chinese nation,” she said.

A Movement Equal in Number to US Population Is Changing China

More Than 100 Million Quit the Chinese Communist Party as of October 1, a “Day of Mourning”

Meanwhile, courts in China continue to try persons suspected of being Falun Gong practitioners. On May 31, 2021, the Intermediate People’s Court of Tongling, a prefecture-level city in Anhui province, sentenced three defendants called Rao, Chen and Zhou to suspended jail sentences, two years and a half for Rao and Chen and eight months for Zhou.

If You Are in China, You Are Being Watched This Very Moment

Understanding “Made in China 2025”