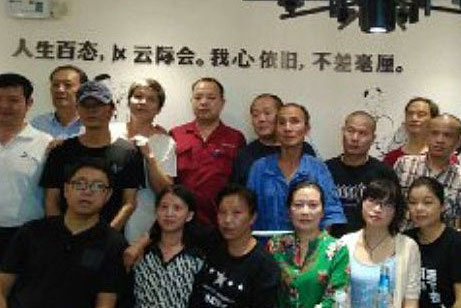 The wife of detained Taiwan NGO worker and democracy activist Lee Ming-Cheh, who pleaded guilty to subversion charges at his trial on Monday, was prevented from holding a news conference after the trial ended, a rights activist in the city told RFA on Tuesday.

Lee, the first foreign national to be held under new laws governing NGO activity in China, stood trial  on Monday alongside Chinese national Peng Yuhua at the Intermediate People’s Court in Hunan’s Yueyang city, where he “confessed” to charges of “incitement to subvert state power.”

Rights activist Xu Qin said Lee’s wife Lee Ching-yu had planned to hold a news conference following her husband’s trial but had been prevented from doing so.

“After the trial ended, Lee Ching-yu had planned to give a news conference, but was thrown out of the conference room in the guesthouse where she was staying,” Xu said. “They wouldn’t let her hold it outside the room either.”

“They hurried her out onto the street, but she couldn’t [speak to journalists] there either.”
When Lee did manage to speak to journalists briefly on Monday, she told them that her husband’s guilty plea “wasn’t made freely.”
London-based rights group Amnesty International has called for Lee’s immediate release in the absence of conclusive evidence proving an internationally recognizable offense.

Xu said Lee Ching-yu had been “exhausted” by her experience in China and had arrived back in Taiwan on Tuesday.

Dozens of supporters who traveled to the central province of Hunan to show support for detained Taiwanese activist Lee Ming-Cheh have been questioned by state security police after arriving back in their hometowns, activists told RFA on Tuesday.

Meanwhile, activist Bao Naigang said he was among an unknown number of people detained outside the court buildings and forcibly returned to his hometown by state security police on Monday.

He said the authorities were likely hoping to silence the country’s dissidents and activist community ahead of the 19th Party Congress next month, where President Xi Jinping will be looking to consolidate his power at the head of the ruling Chinese Congress Party.

“I think they want to use this case to shut up anyone who might be thinking about posting their opinions online around the 19th Party Congress,” Bao said.

Bao said the supporters who showed up in Yueyang had likely heard about the case via social media, rather than being personally connected to either Lee or his Hunan-based fellow activist and co-defendant Peng Yuhua.
“Peng Yuhua isn’t very well known in China, and all he has done in the past is to post to a few chat groups on QQ,” he said. “But they would definitely have been able to start fitting him up once Lee Ming-Cheh joined the group chat.”

Fellow rights activist Ou Biaofeng said he believes Peng was just brought in and pressured into confessing so as to put further pressure on Lee.
“I hadn’t even heard of Peng Yuhua … before the Lee Ming-Cheh case was announced by the [Yueyang court],” Ou said. “I asked a lot of my friends, and they said they’d never heard of him either.”

Chifeng-based rights activist Yuan Bing said he was contacted by his local state security police after a tip-off from the Yueyang authorities that he had shown up outside the Yueyang court to show support for Lee.

“They wouldn’t say it out straight but I think this had to do with the Lee Ming-Cheh case,” Yuan said. “The government claimed that this was an open trial, but then they wouldn’t let people attend [in the public gallery].”
Yuan said he was later followed by large numbers of state security police after he met friends for dinner.

“We succeeded in eating together without any interference, but they were watching us the whole time,” he said. “They heard everything that we were talking about, and they were shooting video and taking photographs.”
“Maybe they plan to use it as evidence to send us to jail later,” Yuan said.

The Most Desperate Response to the COVID-19 Lockdown in China: ‘We Are the Last Generation.’

Prior to his detention, Ou had been a vocal supporter of the pro-democracy movement in Hong Kong, starting from the 2014 Occupy Central campaign for universal suffrage, which later broadened into the Umbrella Movement, and continuing with his support for the 2019 anti-extradition movement, which broadened to include demands for full democracy and accountability for police violence against largely peaceful protesters.

Ottawa: A Chinese Woman Quits the CCP and Its Youth Organizations

Helsinki, Finland: Quitting  the Young Pioneers While His flight Back to China Was Delayed