Explaining the Facts about Falun Gong and Quitting the Communist Party 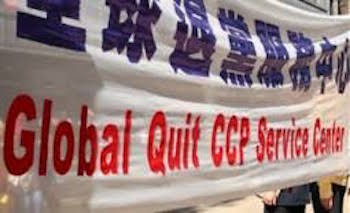 The practitioners where I live go out every day to busy areas in the city to explain the truth about the persecution to people and try to persuade them to sever their ties with the Chinese Communist Party (CCP).
One day by a busy roadside, one practitioner talked with a 60-year-old man, while another practitioner and I were handing out flyers to passersby. After a while, we decided to join in on their conversation.
As we approached them, the practitioner told us that they had different opinions, especially on the topic of the war against Japan led by the CCP.

I realized that the conversation had gone astray. After a short discussion among ourselves, we told the man that it was his choice whether or not to withdraw from the CCP.

The man became enraged and started to rail at us for wasting his time. At that critical moment, I said, “Please accept our sincere apology if we have offended you. Since you seem to be a good man, we don’t want to leave you with a negative impression of Falun Gong, so would you please allow me to say a little more?”

It seemed he had no objection, so I said, “Falun Gong is the Buddha Law.”

His tired eyes brightened when he heard this, so I went on: “It’s well known that, in the 24 years since Master Li Hongzhi first taught the Fa in 1992, Falun Gong has spread to over 100 countries. Only in China has it been cruelly persecuted.”

I asked him, “Do you know why former CCP leader Jiang Zemin launched the persecution of Falun Gong 17 years ago?”

He shook his head, so I continued: “It stemmed from his fear and jealousy over the popularity of the practice. Jiang ordered the Party to eradicate Falun Gong by ruining practitioner’s reputations, bankrupting them, and destroying them physically. He then ultimately sanctioned the killing of practitioners for their organs.

“We love our country, but not the Party. It has brought untold disaster to our nation.

“Believe it or not, the CCP rule will end. Those who are members of the Party, the Youth League, and the Young Pioneers will be the scapegoats when this happens.The time left for people to quit the CCP is limited, so it’s wise to do it as soon as possible.”

Apparently, my words had a profound effect on him. He took a truth-clarifying journal and an amulet from me. “I know you are a good man,” I said. “Please read the journal carefully. I would like to give you the pseudonym ‘Awakening’ to help you make a public declaration to withdraw from the CCP. Is that OK?”

He nodded without hesitation.

‘I Have to Keep Going For my Son’: Jailed Activist’s Mother

Telling People the Truth about the Chinese Communist Party

Whitewashing China: The Rise of “Belt and Road Journalism”