Why Has This Suicidal Stone Tablet Caused So Much Fuss in China?

A huge stone tablet with the writing “Jimei Bridge” suddenly cracked and broke in two, causing quite a stir in China this week.

The stone tablet was located near the Jimei Bridge of Xiamen City in China. While half of the tablet fell onto the grass beneath the bridge, the other half crushed the railing of the expressway causing a traffic jam during the morning rush hour. Fortunately, no one died or was injured.

This mysterious event has tweaked people’s curiosity, however the huge fuss on China’s news websites and social media platforms is people are thinking this is a sign.

Watch this video of the stone tablet suddenly breaking.

Why did it suddenly break?

Well, the answer lies in the words and the autograph on the stone tablet. They were written by the former Chinese Communist Party leader, Jiang Zemin. In 2008, Jimei Bridge was opened to traffic after a total investment of 2.95 billion yuan (about US $450 million).

Jiang Zemin, who was retired at the time, had given an inscription for the new bridge. The stone tablet was then erected at the end of the bridge, until its bizarre cracking.

The stone tablet suddenly gave way at around 3 or 4 am in the morning. In the video the stone showed no signs that it is about to break. While watching the video all seems to be fine, but then within seconds it breaks in two and collapses, as if the stone committed suicide.

The stone tablet is made from granite, weighing tons. Based on the local meteorological department, the maximum wind speed at Jimei Bridge was 4.5 mph, and the strength level was only two that day. So it was absolutely insufficient to break a heavy stone.

The possibility of human damage or traffic accidents has also been eliminated, with the preliminary conclusion being that it broke due to natural weathering.

The news of the broken inscribed tablet was retweeted on Weibo over 7,000 times the day it broke, but the comments were soon closed under the original post. Several news websites in China had also reported this with photos.

Many Internet users wrote the same message: “Isn’t this a clear sign indicating Jiang’s game is over?” As expected, within only a few hours the news had been censored. News websites within China were no longer able to be accessed, and all relevant photos and comments were deleted by China’s Internet monitors.

Jiang Zemin took the helm of Chinese Communist Party in 1989, after the ruthless suppression of the pro-democracy demonstrations in Tiananmen Square.

Ten years later, Jiang recognized Falun Gong, a spiritual qigong practice, as another grave threat to the Communist Party authority. Jiang then launched a state wide persecution against the peaceful group, whose central beliefs are truthfulness, compassion, and forbearance.

Jiang stepped down as the leader of Chinese Communist Party in 2002, however Jiang was just nominally retired. His power has actually intensified during his retirement; over the past decade Jiang’s faction continued to strengthen their military and political power, sending cronies to occupy the key military positions.

After Xi Jinping took office, however, Jiang’s core confidants, such as Zhou Yongkang, Guo Boxiong, and  Xu Caihou have been taken down in Xi’s so-called anti-corruption campaign. Jiang’s wide network was slowly but steadily destroyed.

Like the broken stone tablet, Jiang’s power might fall apart in the blink of an eye. Let’s see what will happen in 2016. 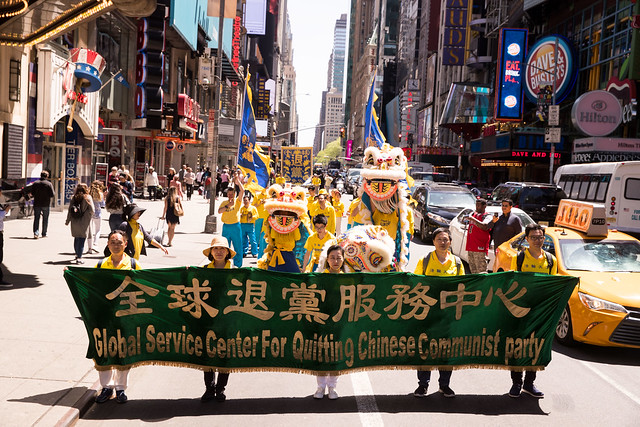 A Comprehensive Report on the Tuidang Movement

"Many televised confessions are the result of extreme physical or emotional coercion and thus qualify as being obtained through torture," the group said, adding that it had interviewed 17 victims whose confession had been obtained through methods qualifying as torture, including severe physical torture.

Hope Unfulfilled: Remembering a Historic Appeal in China 21 Years Ago