This article was first published in China Change web site on December 4, 2015

The Chinese Communist Party marked the anniversary of its inaugural “National Constitution Day” on December 4 with more action than words: workers’ rights NGOs were raided and activists detained; the author of “A History of Brainwashing” was sentenced to nearly two years in prison; and a book on constitutionalism disappeared from stores. The People’s Daily frontpage, meanwhile, seemed to suggest China is now a one-man show… — The Editors 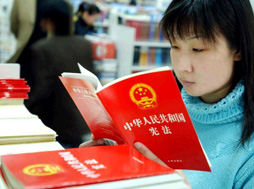 December 4, 2015, is China’s second National Constitution Day—a day that was announced with much fanfare for the first time last year. As of 5 p.m. Beijing time [as this article was written], there is not a single word about it on the homepage of Xinhua, which displays hundreds of other news items. Nor have the words “Constitution Day” appeared anywhere in the major internet portals like Netease, Tencent, or Sohu.

On the homepage of People’s Daily Online, three of its over one hundred headlines have to do with Constitution Day, but they were tucked under yesterday’s report on the third anniversary of the Eight Rules about Party discipline issued by the CCP.

That the state media gives a cold treatment to the first anniversary of Constitution Day is perhaps a reflection of the Chinese authorities: The constitution has not been honored anyway, and it’s better not to bring attention to it or make any pretenses. In any case, few know about it, and those who do know don’t take it seriously anyway.

Such a flippant attitude towards the constitution and the law speaks to the true character of the government, and the contrast between this year’s silence and last year’s outpouring of coverage is stark indeed.

“The life of the constitution lies in its implementation,” Xi Jinping said. So Let’s take a look at how China is implementing its constitution.

But in the past year or so, at least a few hundred human rights lawyers and their assistants have been arrested, confined to house arrest, disappeared, or prohibited from leaving the country; some had their homes raided and their communications intercepted. Publishers of banned books and their employees were disappeared in Thailand or China. The founder of a Hong Kong-based current affairs magazine was tried in mainland China. Liu Xiaobo couldn’t communicate with family members, and relatives have not been allowed monthly visits. Since Professor Ilham Tohti was sentenced to life in prison, his relatives have not been able to visit him on a regular basis. Lawyer Pu Zhiqiang, who was arrested for commemorating the 1989 democracy movement, has been detained beyond the legally prescribed terms, with his trial being postponed twice for a total six months.

Bruce Lui is a senior lecturer in the Department of Journalism at Hong Kong Baptist University. Prior to his post there, he had a celebrated career reporting in China for over a decade with two major Hong Kong broadcasters, winning multiple awards for his reports on nuclear testing, human rights abuses, corruption, and more.

Let’s hope that such tragedy won’t happen again in China. If it does, I don’t think anyone will be holding up the constitution to protect themselves.

The silence on the National Constitution Day shows us how quickly things change in China, how memory evaporates, and what the constitution is really worth to the Chinese government.

Once an enthusiastic supporter of the Chinese regime until she gained a different perspective after moving to Australia, Xu was instrumental in exposing its state-sponsored crimes against Uyghur Muslims in Mainland China through her reporting.