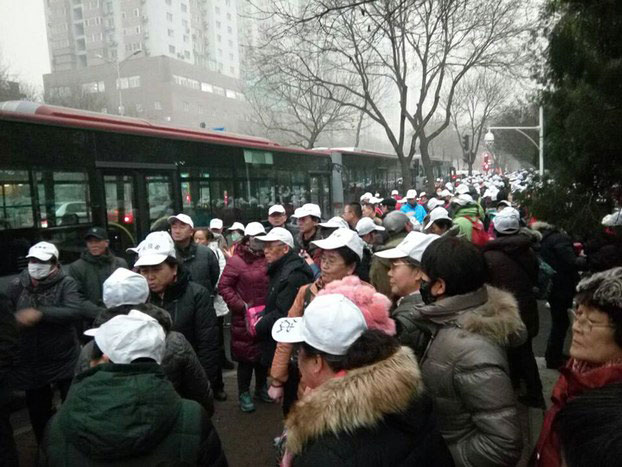 Hundreds of bereaved elderly parents gathered outside government buildings in Beijing on Tuesday, calling on the authorities to enshrine their rights in law, as the country’s parliament moves to amend legislation to reflect the new ‘two-child’ population policy.

Nearly 1,000 elderly people whose only children have died gathered outside the Ministry for Health and Family Planning in Beijing in protest over a lack of government support, blaming their poverty on draconian one-child population controls which lasted 35 years.

The protesters want China’s parliament, the National People’s Congress (NPC) to enshrine their right to state welfare provision into a legislative amendment raising the nationwide birth limit to two children per couple.

A Fang, 60, lost her only son in an accident, and now has little to live on in retirement.

“Now that they have widened it to a two-child restriction, they will be amending the Family Planning Law [this month],” A Fang, who hails from the northeastern province of Jilin, told RFA.

“Elderly bereaved parents like us feel very anxious because we are too old to have any more children, we have no descendants, and there is nobody to provide for us in our old age,” she said.

In October, the ruling Chinese Communist Party announced an end to the “one-child” population control policy, saying that all couples will in future be limited to two children.

The move comes amid growing concern over falling birth rates and a rapidly aging population, although couples who want a second child must wait until the plan is made law.

But the elderly bereaved say they are entitled to compensation, because their hardship is a direct result of compulsory government policy, rather than personal choice.

“We have no pension, no healthcare provision, and no way of knowing how we will pay for what we need, and all of this is a direct result of the one-child policy,” A Fang said.

“We think the government should take this opportunity to enshrine the plight of elderly bereaved parents in law.”

Another protester, a 52-year-old woman surnamed Zhao from the central province of Henan, said the government’s treatment of bereaved elderly parents is unreasonable.

“We can’t figure out why they are excluding us,” she said. “We don’t know what sort of assistance we will receive after this law is amended.”

No promises from officials

Officials at the ministry had come out to listen to their concerns, but had made no promises about implementing their demands, protesters said.

Activists estimate that more than a million elderly people whose only child has died have been left with scant financial support in their old age.

Officials have predicted that one-third of China’s population will be over the age of 60 by 2050, and the law appears to be directed towards the needs of this sector of the population in an era where access to pensions, healthcare and secure accommodation is far from universal.

The law states that adult children have a responsibility to take care of their aged parents, both economically and psychologically.

However, the law does not define an appropriate frequency of visits, nor any penalty for adult children who do not comply.

Elderly protesters say that government support in the form of adequate pensions and social welfare would be a better way of ensuring their well-being.

Officials say the new policy will swell China’s labor force by more than 30 million, reducing the elderly population by two percentage points by 2050.

The government says recent social research shows that married couples within the 20-44 age range old would like 1.93 children on average.