Does China Pose a Threat to the World? 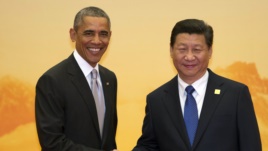 U.S. President Barack Obama, left, shakes hands with Chinese President Xi Jinping during a welcome ceremony for the Asia-Pacific Economic Cooperation (APEC) summit (VOAnews)[/caption] With China’s President Xi Jinping’s visit to the U.S., many Americans have been discussing whether China poses a threat to the world. They have the right to be concerned. China’s recent acts include island-building activities in the South China Sea and an Admiral’s declaration that the South China Sea “belongs to China,” widespread, non-stop cyber intrusions, a recent military parade that showcased missiles with English writing on them such as “carrier killer” and “Guam killer,” warships sailing into U.S. waters, and the arrest of over 200 human rights lawyers and activists inside China. In addition, China’s slow economy has impacted the world’s stock market, China devalued its currency, and many U.S. critics have commented on China’s stock market intervention. However, Chinese view things differently. To many Chinese, the things about which the West is concerned do not seem to be Xi Jinping’s top issues. Xi’s focus is his consolidation of power internally that has been primarily done through his signature work, the anti-corruption campaign. He has warned that this campaign has come to a critical point and has vowed to carry it to the end “with no cap [on the rank of tigers].”

When former leader Jiang Zemin transitioned power to Hu Jintao, Jiang created a collective leadership structure. Power was shared among nine politburo standing committee members, where Jiang’s faction had the majority of seats. This effectively limited Hu’s power and gave Jiang the upper hand, even though he had “retired.”
When Xi took power in late 2012, Jiang’s faction had three of the seven politburo standing committee seats and still shared a lot of that structure’s power. Xi started the anti-corruption campaign against his opponents to get the power back.
By taking down Xu Caihou and Guo Boxiong, the two former Vice Chairmen of the Central Military Commission, Xi worked to establish himself as the real leader of the People’s Liberation Army. Xi’s next move in the military is to continue the consolidation of power by restructuring the military and cutting 300,000 from the military staff.
Xi also took over power from Zhou Yongkang, China’s former security Tsar, now a fallen tiger. He is gradually moving into those fields that others used to manage: propaganda, diplomacy, state-owned enterprises, finance, and the economy.
Many Chinese political analysts think that Xi will be pre-occupied with the internal political fight and will, in the short term, avoid international confrontations.
However, that does not mean there is no threat from China. Xi’s opponents in China may not be sitting in silence waiting to be taken down as “tigers.” Jiang’s faction stirred up the Hong Kong “umbrella” movement for Xi last year [1] [2]. There is speculation that the free-fall of China’s stock market and the Tianjin explosion were also man-made disasters [3] [4]. If this is true, it shows that some people are willing to create trouble for Xi in order to embarrass him or have him look like a failure. The continued effect on the Chinese people and on the world may indeed be dramatic, or even devastating.
The decline of China’s economy will inevitably impact the world. China’s currency devaluation and the promotion of the renminbi as a global currency will also impact the world. Its “one belt, one road” strategy may also change the diplomatic landscape in Asia and the Middle East.
The Chinese Communist Party (CCP) established the “going abroad” strategy a few years ago.
It is gradually asserting its influence over the world. The incidents mentioned seem indeed to pose an overt threat to the world.
Nonetheless, there is another growing threat to the world. Its influence has often been both slow and subtle. In fact, it has been so slow and so subtle that, like a frog placed in a pot of cold water that is slowly heated and does not perceive the danger, the world has not awakened to this aspect China’s influence: The CCP is quietly and unnoticeably changing the world’s values.
The West, especially the U.S., has long believed in and stood up for democracy and universal values. It sees its responsibility as and takes great pride in defending man’s inalienable rights. When dealing with China, however, it seems that the West has gradually accepted two fallacies that the CCP has established:
1. For China, the most important human rights issue is to feed the people (in other words, ignore other human rights violations).
2. China’s human rights issues are China’s internal affair.
As a result, when over 200 Tibetans set themselves on fire over a two year period to protest
the CCP’s religious suppression; when Falun Gong practitioners reported hundreds of thousands of cases of mistreatment and even large scale live organ harvesting; when many Chinese have nowhere to go to report injustice such as forced-demolition, official’s abuse of power, and environmental pollution, and are even arrested when they try; the West has, for the most part, stayed quiet.
The CCP is exporting its value system to the world. It helped Iran build its own firewall for Internet censorship, it has promoted the “China model” as a superior replacement over the
free market, it denied American professor Elliot Sperling’s visit to China because of his vocal support of his Uighur colleague, Ilham Tohti, and it has influenced the world to isolate people that it does not like, including the Dalai Lama and Cheng Guangcheng.
So, does China pose a threat to the world? It is time to take a broader look.
]]>

“When we were in China, we all joined the Chinese Communist Party (CCP) and its youth organizations which promotes atheism. We even gave our lives to the CCP. Thus, there will be danger in the future. Why don’t I help you by giving you a pen name to quit the CCP?

The Gaslit Games: Xi Jinping, Thomas Bach, and António Guterres are Driving the Olympic Movement Toward a Shared Authoritarian Future