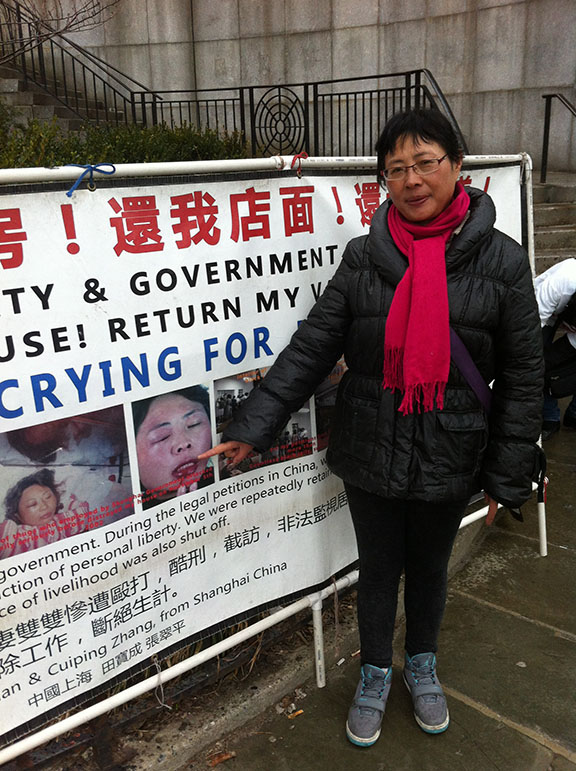 Zhang Cuiping protesting the theft of her property by the Chinese Communist regime in front of the UN buildings in New York on April 3, 2015.[/caption] Zhang Cuiping became a petitioner after the store she owned in Shanghai was forcibly demolished by Chinese authorities in 2001, destroying her source of income along with it. Zhang and her husband Tian opposed the demolition. As a result they were beaten numerous times. Ms Zhang sat down with a Tuidang researcher earlier this month in New York. “They shouted at us, ‘We are backed-up by Premier Li Peng. If you want to talk, go to Beijing to talk to him!’” she said, referring to the thugs who removed her and her husband from their property in Shanghai. Zhang believes that former Premier Li Peng was the CCP member behind the theft of her property. Li Peng had been Premier of the CCP, and the second in command of the Party, from 1987 to 1998. In 1989 he declared martial law and ordered the crackdown on the students in Tiananmen Square. Year after year, thousands of Chinese who have some kind of grievance with the Communist Party, travel to Beijing to petition at one of the three major petitioning bureaus. Usually they receive no compensation. Instead they face violent repression and prison. Zhang and her husband were sentenced to forced labor camp and prison for appealing to the Communist regime about the theft of their property. “We both experienced inhuman torture in the prison system,” she said. “I was tied to a bed for over 30 days,” Zhang said, recounting her experience. “My husband was tied to a bed for nine days and nights, with his four limbs stretched in all directions, and his mouth was gagged with a filthy mop that was used for cleaning toilets.” In 2003, Zhang learned about Freegate, a computer software available inside China that helps users bypass the ‘Great Firewall,’ and access information freely outside of China. In 2008, after her release from forced labor camp, Zhang received the Nine Commentaries by email. “I found every single sentence was correct!” said Zhang. Before prison, Zhang said she would have been afraid of reading the Nine Commentaries, “But after my experience of imprisonment, I became fearless and was eager to know more about the Tuidang movement.“ She used Freegate to learn more. Tuidang means to “withdraw from the Party.” It emerged after the Epoch Times newspaper, based in New York, published the Nine Commentaries on the Communist Party in November 2004—a series of editorials explaining the history and tyranny of the CCP. It describes how Chinese people have suffered numerous political campaigns and social upheavals over 65 years that have resulted in an estimated 60 to 80 million deaths. In 2009, “We received a phone call from a Falun Gong practitioner, who explained the Tuidang movement to us,” she continued. “Immediately we expressed our willingness to renounce the Party.” Zhang expressed sympathy for Chinese people, “There are still so many people deluded by the CCP and who continue to believe deeply in the CCP. Most of those people, ironically, are grassroots people who suffer the most. They have less chance to hear views by people outside CCP channels. Before experiencing persecution, I was one of them.” Falun Gong practitioners often volunteer in the Tuidang movement to help people renounce the CCP. Frequently, they suffer verbal and physical attacks inside China, but also at the Tuidang Center booths and tables outside of China. When the CCP launched a brutal assault on Falun Gong in 1999, it used its control of the media to turn public opinion inside China against the practice, and in support of its coercive and violent measures to force Falun Gong practitioners to give up their beliefs. The Nine Commentaries were published 5 years later. For the first time, Chinese people learned the history of the CCP that had been hidden. Chinese people had a vague sense that the CCP was evil, but when the Nine Commentaries came out they suddenly knew why it was evil. The Tuidang movement followed, but it was not a political solution for China. It was a more fundamental solution that guided Chinese people to separate themselves from Communism, freeing their mind and conscience. It was a restoration of Chinese morality. Following is an excerpt from Commentary 9:

After several decades of brainwashing and suppression, the CCP has instilled its way of thinking and its standards for good and bad into the Chinese people’s lives. This has led people to accept and rationalize the CCP’s perversion and fraudulence, to become part of its falsehood, thereby providing the ideological basis for the CCP’s existence.

Inside China, Falun Gong practitioners have largely made up the body of volunteers who have propelled the Tuidang movement forward. Minghui.org, a website that distributes information about Falun Gong and the persecution, estimates that approximately 20 million Falun Gong practitioners inside China are helping people quit the CCP and its affiliated organizations, the Young Pioneers and Youth League.  Zhang said she had been deeply affected by CCP propaganda about Falun Gong, but that all changed after she met a Falun Gong practitioner in the labor camp. “I said to her, ‘You Falun Gong practitioners are all so weird, you are all possessed by the devil but still practice.’ The practitioner smiled and said, ‘Those are lies.'” When the practitioner’s family sent her food, she gave the food away to others, according to Zhang. “At showering time there was always a long line waiting, she always let others go before her. When the hot water was used up and everyone was finished, she bathed with cold water.” Zhang and her family fled China after she and her husband were release. They arrived in the US on a travel visa in November 2012. Both were granted asylum, and are now permanent residents. She continues to petition for her property in Shanghai in front of the United Nations building almost daily. Other Chinese petitioners have joined her. She displays panels, exposing how she was treated by the CCP. At gatherings of family and friends, Zhang tells people about Tuidang. As a result many have quit the CCP. Zhang believes the Tuidang movement is changing China. “At a friend’s gathering, one person still said the CCP is good,” Zhang said with her voice rising. “My sister-in-law immediately stood up and said, ‘The CCP is good? So many CCP members are quitting, including my own brother! The CCP is corrupt.'” As a result of the extreme corruption of the CCP, the regime tries to shape how people look at and talk about it. Zhang said, “If people in China complain about the CCP, they will be arrested. If they complain outside of China, they are labeled as ‘anti-China forces.'” The problem, as Zhang points out, is that the CCP controls people’s thoughts.]]>
Share on facebook
Facebook
Share on twitter
Twitter
Share on linkedin
LinkedIn
Share on google
Google+

A Former Colleague of Mine Quits the Chinese Communist Party

Enough Is Enough: Stories of People Joining Tuidang, the Movement to Quit the Chinese Communist Party

Who Is The Winner of China’s Boycott Fanaticism?