Helping Chinese To Quit the CCP Come Rain or Shine 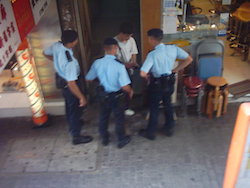 Since 2006 I have been a volunteer at the Tuidang center for quitting the Chinese communist party (CCP).

I am nearly 70 years old and my son teases me about my being busier than a government official.

After the ‘Nine Commentaries on the Communist Party’ was published, I began telling my family and friends about Falun Gong and the persecution, and encouraged them to withdraw their membership in the CCP and its affiliates.

People Quit the CCP after Learning the Facts

Once a man told me that the CCP members in his village were told to pay their Party fees or their membership would be cancelled automatically.

Two retired men willingly withdrew their membership and wrote “I quit my CCP membership” on a piece of paper.

Then a dozen others did the same.

I explained to the man why people had to withdraw from the CCP saying, “The CCP is responsible for the deaths of 80 million Chinese since it came to power. They now harvest organs from living Falun Gong practitioners to make huge profits. They persecute good people. So it is best if you to quit the CCP.”

He agreed to quit. Some people nearby were listening and also agreed to quit the CCP and asked for Falun Gong information materials.

A fellow practitioner and I went to a market in 2011 to let people know about Falun Gong and the persecution. Dozens withdrew from the CCP after we spoke with them.

We gave material to a lady and two men and told them that they were very fortunate to get them.

They came back shortly and said, “We are police officers. Come with us.”

I told them that former President Jiang Zemin’s gang is responsible for harvesting organs from living Falun Gong practitioners and that those who participate in the persecution would be held responsible in the future, because it is a heavenly principle that good will be rewarded and evil will be punished.

One of the policemen asked me if he had committed a crime by arresting me. I said that he would not have persecuted Falun Gong practitioners if he had known the truth. I encouraged him to withdraw from the CCP and he agreed. At the police station, I helped three other policemen quit the CCP and its affiliates.

The head of the local domestic security division came and shouted at me, “How come you are still alive? Don’t you have high blood pressure?”

I had to go with him in his car, but after a short time he stopped the car and said, “You can go now. Be careful when you get out.”

I wished him a good future and told him that he could quit the CCP on the Tuidang website.

Who Is The Winner of China’s Boycott Fanaticism?

The statement expressed concerns over the forced labor and discrimination against ethnic minorities in the Xinjiang Uyghur Autonomous Region and that H&M would consequently terminate its business contract with cotton suppliers and manufacturers from the Xinjiang region.