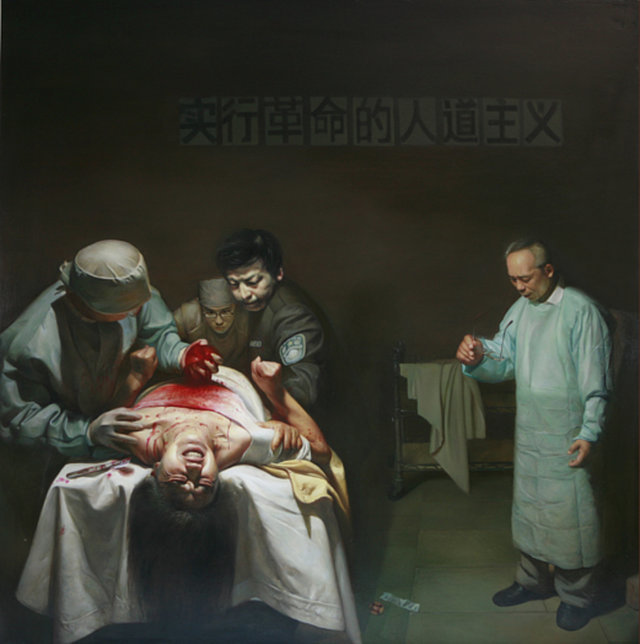 A painting showing live organ harvesting and the terrible toll it takes on the Falun Gong practitioners who are killed, as well as those who commit these horrific crimes. Painting: Sitsian Dong (Xiqiang Dong – 2007 FalunArt.org)[/caption]

Recently, Minghui.org, an official site for Falun Gong meditation, released a story about a new dimension in the forced organ harvesting and transplantation programs in China.  For the past 15 years, peaceful Falun Gong meditators have been persecuted in China.  The persecution has included arrest, imprisonment, torture, forced labor and even live organ harvesting.  Falun Gong is a traditional and advanced Chinese qigong self-cultivation that was first publicly introduced in China in 1992 and had up to 100 million people doing the practice when the Chinese Communist Party banned it in 1999.  It had no central control and there were more practitioners than members of the communist party, so the party became jealous and banned it.

This vile policy of live organ harvesting has included not only Falun Gong practitioners, but also Christians, Uighurs and political opponents.   This has been well documented by several people, including the former Canadian human rights minister David Kilgour.  See the link HERE. The excuse of using condemned prisoner’s organs isn’t working any more — in one major city there were about 50 executions, but 1,000 transplant operations. The Chinese culturally don’t believe in donating their organs, so where are they coming from?

Now, the organ harvesting tragedy has taken a dramatic turn, with the police in China BREAKING INTO THE HOMES of Falun Gong practitioners to draw blood for testing that will no doubt be used for a database of potential organ harvesting victims (from Epoch Times): “Police across China are bursting into the homes of Falun Gong practitioners and forcing them to give blood samples in order to set up a DNA database, said a report published last week on a human rights website. The police are believed to be doing the testing in order to expand the list of potential donors whose organs may be taken for forced harvesting. A July 19 article on the Falun Gong-run website Minghui.org lists over 25 incidents, some involving as many as 10 practitioners, in Liaoning, Guizhou, Hebei, and Hunan provinces, as well as in Beijing. These provinces are dispersed geographically, stretching from the far northeast of the country to the southwest. In a typical incident, Falun Gong practitioners report police breaking into their homes and extracting blood against their will, sometimes forcibly.” Based on these reports out of China, this is becoming an even more grevious injustice. As Epoch Times reported in July, while interviewing Ethan Guttmann, the author of a recent book on this tragedy in China, The Slaughter: “The Chinese medical establishment essentially reneged on all their claims of organ harvesting reform back in March, so the timing appears to fit,” Gutmann wrote in an email. “If Minghui’s information is correct, the situation in China is rapidly deteriorating.” Matas speculated that this new tactic for gathering practitioners’ data might be linked to the shutdown of the labor camps in China at the end of 2013. “It sounds like an adaptation to the closing of the labor camps,” Matas said. “They only needed the practitioners in the labor camps to keep them as an organ donor bank. If authorities can have that, then they don’t need to keep the practitioners in detention.” I spoke with Mr. Guttmann outside the World Transplantation Convention in San Francisco several months ago and asked him how this compared to what was done to Jews and others during WWII.  He told me “before this news, I’m not sure I could have told you that it reached the level of Nazi Germany, but with this new information regarding home blood sampling of Falun Gong practitioners in China it could easily become another Holocaust.” Be sure to share this article with your friends on Facebook and social media, it’s quite shocking.  You are welcome to redistribute this article in it’s entirety, just leave a link back to the original sources and to Before It’s News.
[youtube_sc url=”http://youtu.be/oDOIeNhUWiQ” hd=”1″]
[youtube_sc url=”http://youtu.be/bosvpa-I5oU” hd=”1″]
]]>
Share on facebook
Facebook
Share on twitter
Twitter
Share on linkedin
LinkedIn
Share on google
Google+