Tuidang Center Tuidang, quit-the-CCP (Chinese Communist Party) volunteers are active in Saint Paul, Brazil. Chinese volunteers, in cooperation with Brazilian volunteers, are persuading Chinese tourists and local Chinese merchants and residents to quit the CCP and its affiliated organizations on a daily basis. More and more Chinese tourists have announced their withdrawal from the CCP and its affiliated organizations with the help of the volunteers.  Here are three stories from the field:

As a local Chinese merchant was busy in his store, Tuidang volunteers approached him with smiles and gave him the book Nine Commentaries on the Communist Party. When the Chinese merchant saw the title, he became angry and threatened to throw the volunteers out. Instead of getting annoyed, the volunteer, a middle-aged lady, explained to him peacefully and patiently, “The Communist Party derived from the evil spirit in Europe, why you follow a foreign evil spirit? The CCP has killed 80 million Chinese people in repeated political movements, it is anti-universe and anti-human beings, and Heaven will cause it to perish soon, why you follow it to meet its tragic death? Only quitting the CCP can save you!” Finally, the merchant, moved by the volunteers, nodded to quit the CCP and its affiliated organizations. He also asked his daughter to quit the Young Pioneers. [caption id="attachment_2337" align="alignleft" width="444"] 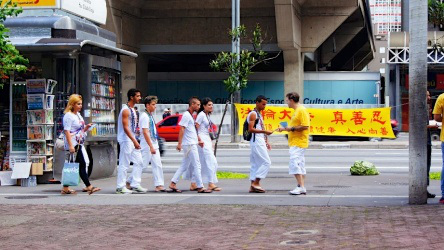 Upon seeing the “Nine Commentaries”, a Chinese girl’s eyes lit up as she asked, “Do you have other materials? If you do, please give all of them to me. I like this kind of material, it tells the truth. In China we were angry but could not do anything or even say anything. The CCP is so bad, they speak all the good words and do all the bad things.” She happily agreed to quit the Young Pioneers. The volunteers wish her a good future, she also wished good luck to the volunteers.

One day, the Chinese and Brazilian Tuidang volunteers visited a small mall on a busy business street in Saint Paul.  A young mother, who appeared to be a tourist from China, was coaxing her little son. The child said, “I am angry, don’t want to talk to you, mom.” The volunteers walked up and handed her truth materials. Upon seeing it, the woman said with a skeptical look, “The CCP is not bad. I am a CCP member, without CCP how could we have a new China?” The volunteers explained, “The so-called ‘new China’ implements the one-child policy and over 300 million innocent infants have been killed as a result , is it good? The ‘new China’ divided the people into city population and rural population, made most Chinese people lead a life with no social securities, is that progress? The ‘new China’ produced a great deal of poisonous milk, rice, etc., is it civilization?” The young mother’s skeptical look disappeared, but she still did not want to quit. At that moment, her son said repeatedly, “I am angry, don’t want to talk to you.” Another volunteer continued, “Even the officials of the CCP do not believe in communism anymore. Jiang Zemin’s CCP clique tortured Falun Gong practitioners, and even harvested their organs when they were still alive to make dirty profits. All the governments, organizations and personnel with justice are condemning this appalling evildoing. Please quickly quit the CCP and its affiliated organizations! You will be free from the demons and obtain safety.” Now the mother’s look became serious, she nodded, “Ok, I quit.” At that moment, her little son happily leaned his head on her. The volunteers witnessed significant changes in people through the explanation of truth. [divider] Sources: minghui.org]]>

Overseas Chinese Call for an End to the Chinese Communist Party

Chinese People Quitting the CCP in Front of the Chinese Consulate in Nagoya, Japan

Global Service Center for Quitting the Chinese Communist Party Chapter One: Background and Origin of the Tuidang Movement 1. Overview Traditional Chinese culture is founded upon the ideologies of Confucianism, Buddhism and Taoism. The moral standards formed from these have enabled the Chinese nation to thrive for 5,000 years. Dynasties have come and gone with generations of Chinese people enjoying a prosperous and enchanting land whose culture was believed to be a gift from the Divine. However, after the CCP usurped power in 1949, it brought endless disasters to the land of China and the Chinese people. The past six decades under CCP rule has been the darkest period in all of China’s long history. After several dozen political campaigns aimed at “reforming” people’s thoughts,...

Absent Help From Authorities, Locals Take Relief Work Into Their Own Hands in Flood-Hit Central China

Breaking: “The Burning Down of the CCP Virus Statue In California Is An Attack on the US”