A Beijing based German correspondent was accused of espionage by Chinese Communist Party (CCP) authorities. Terrified, she fled China.

Angela Köckritz, 37, a correspondent for the Hamburg based Die Zeit weekly newspaper, was interrogated by CCP police four times shortly after the October 2nd 2014 arrest of her news assistant of two years, Zhang Miao. 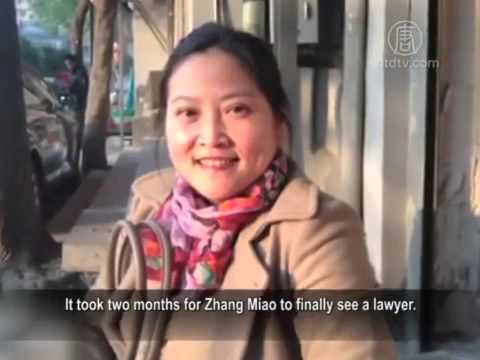 A week prior to Zhang’s arrest, the two-women-team flew to Hong Kong to cover the pro-democracy protests.

Zhang, a Chinese citizen, had to return to Beijing when her one-week visa to Hong Kong expired. Upon her return, she was arrested and placed in custody.

A Washington Post phone interview with Köckritz stated that she met with Chinese authorities several times and later with German embassy officials to lobby for Zhang’s release. But while still in Beijing, the authorities had invited her in for several “chats.”

The “chats” turned out to be a series of interrogations at a police station room in a windowless room. The interrogations intensified as they continued.

The interrogators began with questioning Köckritz about Zhang, their relationship, who they met in Hong Kong, and what she knew about Zhang’s arrest. They threatened her with the loss of her work visa if she did not cooperate.

The second interrogation took place two days later. Two higher-ups, more experienced interrogators, conducted the interrogation which lasted 4 1/2 hours. Köckritz was told there would be negative consequences if she planned to write about Miao’s arrest. They tried to force her to sign a five-page statement written in Chinese.

The third day, interrogators attempt to break trust between the two coworkers by stating that Zhang had signed testimony implicating that Köckritz had planned and organized the protests in Hong Kong. When Köckritz refused the allegations and rejected their implications, the interrogators abruptly, forcefully, and repeatedly screamed at her accusing her of lying.

“The leadership is about to pass a big new anti-espionage law,” wrote Köckritz in her article describing the interrogation process that lead to her fleeing China, “From the beginning, it has said that Occupy Central is a “color revolution” backed by foreign powers. Its argument would be more credible if it could produce a suspected spy. Maybe me?”

In the fourth interrogation, interrogators tried to pressure Köckritz into signing a ten-page statement written in Chinese, which she refused. Köckritz further writes, “Now I’m starting to experience first hand something that I’ve read a lot about: their skill at twisting the meaning of things… the Chinese security apparatus has plenty of options: It can use other laws as a fallback, twist evidence, launch character-assassination campaigns or resort to mafia methods.”

As Köckritz arrives at the airport the next day, a fellow correspondent calls to tell her that Phoenix TV, a media station in Hong Kong, mentioned a German journalist traveling on the island as an agent provocateur inciting protests against the Hong Kong government.

Zhang Miao was not allowed to see a lawyer until Dec. 10th, more than two months into her detention, in violation of Chinese law.

She is still in jail.

China Is Not A Normal Country

Chinese Lawyers Outraged as Colleague Is Dragged From Court