Chinese New Year holiday goers to Mission Bay, one of the famous tourist attractions in Auckland, unexpectedly found something unique.

They learned about Tuidang, the movement of quitting the Chinese communist party (CCP) and also about Falun Gong persecution in China. Many of them happily renounced their membership in CCP organizations. 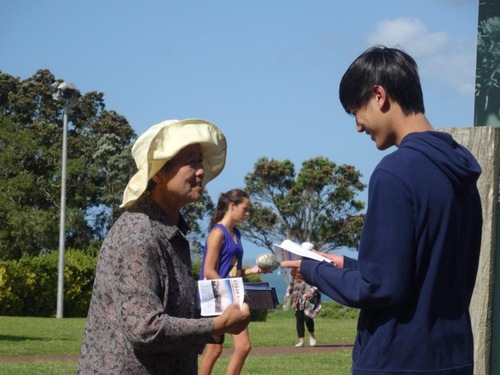 An unexpected gift — a Chinese tourist accepts informational materials about Falun Gong with a smile (minghui.org)[/caption]

After renouncing their membership in the CCP organizations, many tourists were grateful for an opportunity to make such an important decision.

The following are three collected stories about how Chinese tourists quit the CCP organizations:

Ms. Meng, a Falun Gong practitioner working at the Tuidang center, came across a Chinese tourist three times in a day at Mission Bay before the tourist, in his 50s, agreed to renounce his membership in the Party.

The first time when Ms. Meng ran into him, Ms. Meng asked him, “Sir, do you know about Tuidang, quitting the CCP movement?” Ms. Meng hadn’t spoken a few more sentences before this man got angry. He repeated the lies that the CCP had instilled in him, and looked as if he was going to physically attack Ms. Meng.

Ms. Meng was calm and peacefully explained the real situation to him. Before he left, she said, “Don’t be angry, I don’t have any bad intention. I just want the best for you.” 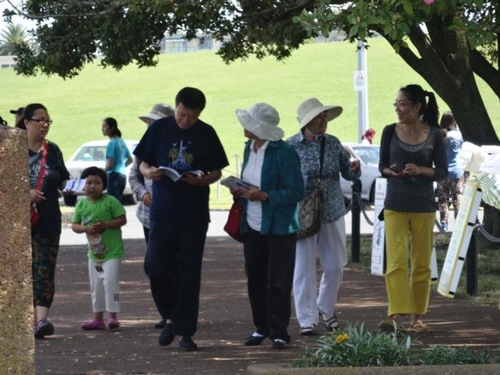 After a while Ms. Meng ran into that tourist, dressed in red. She told him, “Don’t be angry any more, sir. You don’t know the true situation, please allow me to tell you.”

Ms. Meng then talked about how the CCP fabricated lies to smear Falun Gong and persecuted Falun Gong practitioners, in order to incite hatred.

That tourist listened quietly, without saying a word. After that Ms. Meng went to talk to other tourists. Shortly after, she met the man in red for the third time.

Ms. Meng talked to him about how the Roman Emperor Nero persecuted Christians, which led to the destruction of the entire country. She said, “As a Chinese person, if I don’t stand up to expose the CCP’s crimes, it’ll be the biggest disgrace for me.”

Ms. Meng finally talked about quitting the CCP for his own safety, and asked him if he had joined the Party.

The man immediately answered, “I did join it before, I’m a Party member.”

“All right. Thank you!” the man replied crisply.

Ms. Sun, another practitioner, is from Haiyang City, Shandong Province, China. She happened to meet more than a dozen tourists from her hometown on New Year’s Day.

Ms. Sun was very happy to see them and felt a kinship with them immediately. She told them, “We are from the same hometown, please trust me. If you’ve joined the Party, the Youth League or the Young Pioneers, you should quit it for your own safety.”

“Yes, you’re right.” One man replied. “All of us in this group are Party members.”

The man then pointed at another man nearby and said, “Please count him in.”

A few others in this group also eventually renounced their membership in the CCP organizations.

“I Quit with My Real Name”

As soon as the man saw Ms. Sun, he said, “I know you’re Falun Gong practitioners. I feel for you. I also know that the CCP’s days are numbered. It’s about to fall.”

“But I’m not a Party member, nor did I join the Youth League.” The man said.

“You must have joined the Young Pioneers, then? You should quit it, too.” Ms. Sun suggested.

“Yes, and please use my real name to quit.” The man answered.

This story is based on an article from Minghui.org

How I became the “Quit-the-CCP Ambassador”

Ottawa: A Chinese Woman Quits the CCP and Its Youth Organizations

Confucius Institutes are embedded in universities around the world, including dozens of U.S. universities, where they offer Mandarin language teaching, cultural activities, and other events to students. The State Department regards the programs as a foreign mission of the Chinese Communist Party.

Story of Quitting the Chinese Communist Party: “I Finally Found You”