China’s embattled legal profession ended last year with at least seven prominent rights attorneys behind bars, in one of its worst years since its renaissance in the 1980s, an overseas rights group said in a recent article.

The Chinese Human Rights Defenders (CHRD) group, which translates and collates details of human rights cases from Chinese rights groups, cited the case of prominent lawyer Pu Zhiqiang, who turned 50 in jail this month, and who has been held for more than six months as prosecutors request further evidence to support subversion charges against him.

“The past year has been distinctly bad for a band of crusading lawyers, who for the past decade or so, since their movement first emerged, have described their mission as ‘weiquan,’ or ‘safeguarding rights, ‘CHRD’ researcher Frances Eve wrote in a commentary article emailed to RFA. 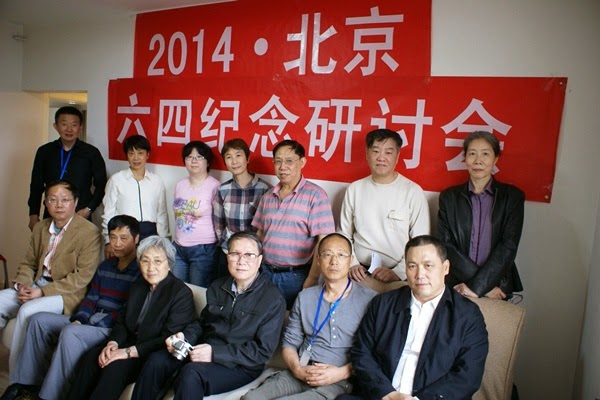 Pu Zhiqiang (front right) attends a seminar about the Tiananmen crackdown in Beijing, May 3, 2014.
(Photo courtesy of CHRD)[/caption]

It said the ranks of human rights lawyers operating in mainland China have grown from just a handful to more than 200.

But since 2003, the authorities have begun detaining attorneys who engage in this sort of work, it said.

The unprecedented scale of criminal prosecution against rights lawyers is at odds with pledges to “govern the country by law,” which was the declared theme of China’s ruling Communist Party’s Fourth Plenum leadership gathering in October, the group said.

Pu, a former activist in the 1989 pro-democracy movement, was detained last May, initially on charges of “picking quarrels and stirring up trouble,” and “illegally obtaining personal information.”

But police later added the more serious charges of “inciting separatism” and “incitement to subvert state power,” while Beijing-based rights lawyer Mo Shaoping, who heads Pu’s defense team, has repeatedly accused the authorities of “deliberate delays” to the case.

“The time period allotment for re-investigation of the Pu Zhiqiang case is now up, and his lawyers have been in touch with the prosecution service, who [initially] said the police hadn’t yet sent across the relevant files,” Mo told RFA on Tuesday.

“Then lawyer Shang Baojun contacted the procuratorate again, and the reply came back that they had sent the case files, and that they wanted us to go and view them in the next few days,” Mo said.

He said much of the evidence against Pu consists of “more than 30” tweets to the popular Twitter-like service Sina Weibo.

According to CHRD, the separatism charges relate to an online post Pu made hitting out at the official version of the Kunming railway station knife attack in March 2014.

Beijing-based rights activist Hu Jia, who is a close personal friend of Pu’s, said the authorities seemed determined to drag the case out for as long as is legally possible.

“I think it’s because Pu Zhiqiang is a prominent figure, whose case is attracting a lot of international attention,” Hu said.

“He’s a famous human rights attorney, a dissident, and one of the leaders of the Tiananmen Square democracy movement,” he said.

“This means that the authorities are going to make an example of him, to use him as a deterrent for stability purposes,” Hu said.

Hu said Pu had helped countless people fight for their rights, including those incarcerated in police-run labor camps and “political study centers.”

“Everyone should be speaking out on behalf of this top rights lawyer, who is innocent,” Hu said.

Last month, about a dozen prominent rights lawyers signed an open letter calling on the government to uphold the rights and freedoms enshrined in the country’s constitution.

The author of the letter, Guangzhou-based rights lawyer Wang Quanping, has since taken the Guangdong provincial authorities to court after they revoked his business license, which Chinese lawyers must renew every year, rendering them vulnerable to state control.

Wang said Tuesday’s hearing, which had been adjourned from last week, was bogged down in procedural wrangles after his legal representatives were denied entry to the Guangzhou Intermediate People’s Court.

“The judge was abusing his powers, so I will be submitting a lawsuit to the prosecution and the disciplinary authorities, for his illegal conduct of this hearing,” Wang said.

Meanwhile, fellow rights lawyer Guo Lianhui said rights lawyers will hold a seminar to discuss ongoing attacks on their colleagues in the next few weeks.

“Building the rule of law in China, the growth of civil society … will need every individual citizen to get involved, if it’s going to get off the ground,” Guo said.

Chinese rights lawyer Wang Quanzhang to appear in court on Dec 26, after 3 years of detention – wife

Kazakh Family of Writers and Musicians Caught in the Xinjiang Vortex