Epoch Times There’s a political joke going around in China that goes like this: After the arrest of Zhou Yongkang (the former security czar), the anti-corruption bureau asked Xi Jinping (the paramount leader), “Who should we go after next?” Xi said, “Hmm—you should get a plan.” And so they arrested Ling Jihua. (‘jihua’ means plan, or planning, in Mandarin.) The joke explains at least that there is no consensus on why Xi Jinping recently arrested Ling Jihua, previously a top aide to the immediately former Communist Party leader Hu Jintao. There is little doubt that his family had enormous interests—which in the Chinese context means massive corruption—in the coal-rich Shanxi Province, and ultimately he was an ally of Hu Jintao, not Xi Jinping. But not every corrupt family suffers the Party’s wrath, so the move has surprised many observers of Chinese politics. At least one thing is certain, though: it couldn’t have happened to a nicer guy. Few will shed a tear at Ling’s purge after getting to know the organization that he most recently ran—the United Front Work Department.

The awkwardly named agency has been a core part of the Chinese Communist Party’s modus operandi since the days of the civil war with the Nationalist Party, which the CCP won in 1949, seizing control of China. The United Front was at the time called one of the CCP’s “three treasures” (the other two were the Party leader and the “mass line,” which ostensibly means getting to know the needs of “the masses.”)
[caption id="attachment_2111" align="alignleft" width="400"] 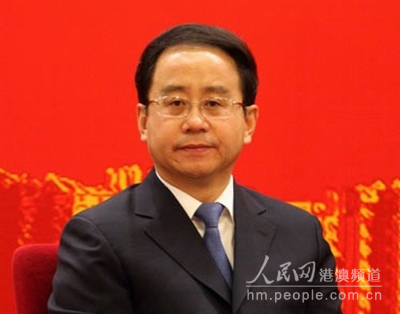 Former chief of the United Front Work Department, Ling Jihua, investigate for corruption, (hm.people.com.cn)[/caption] There is no Western equivalent to the United Front, either conceptually or institutionally. As a bureaucracy, it is not part of the government, rather it is a political, Party-run organ and reports directly to the CCP’s Central Committee. It’s always headed by a senior Party official.
Its techniques include propaganda, agitation, psychological warfare, alliance-building, isolation of enemies, and general political struggle to advance the interests of the regime. Its ambit is both domestic and international. Outside China, the United Front’s activities are widespread and impressive in scope. In Taiwan, it tries to influence the outcome of elections through co-opting politicians and building alliances with the Nationalist Party, which governs the country. In Hong Kong, foot soldiers that are part of the United Front’s network dress up as practitioners of Falun Gong, a spiritual practice that is persecuted in China, and hand out anti-Falun Gong propaganda—a move designed to harm the reputation of the “enemy” group. One of the most basic explanations of united front thought is contained in the name of one of the most comprehensive books on the subject,Enemies and Friends, by Lyman Van Slyke. The United Front seeks to build coalitions that are aligned with Communist Party interests, and isolate and attack those deemed enemy to it. The World Organization to Investigate the Persecution of Falun Gong has done prodigious research documenting these activities. The United Front holds training events and summer camps for leaders of overseas Chinese communities; establishes or infiltrates “friendship associations”; gains control or influence over overseas Chinese celebrations; plants and censors articles in the overseas Chinese press; influences Chinese-language schools overseas; and more.

An emblematic united front tactic took place in 2001 against Falun Gong, when Chinese embassies and consulates secretly instructed 50 Chinese organizations in Canada to write a letter to the prime minister, calling for the government to restrict the community activities of Falun Gong practitioners. Western officials, unfamiliar with the astroturf nature of the exercise, may have received the impression that the overseas Chinese community really did oppose the peaceful spiritual group.
Wang Zhiyuan, a spokesman for World Organization to Investigate the Persecution of Falun Gong, told New Tang Dynasty Television: “After Ling took office, the persecution of Falun Gong practitioners overseas indeed increased; there have been more cases.”
The book Nest of Spies, written by two Canadian intelligence researchers, states that the United Front Work Department “manages important dossiers concerning foreign countries. These include propaganda, the control of Chinese students abroad, the recruiting of agents among the Chinese diaspora (and among sympathetic foreigners), and long-term clandestine operations.”
The department also plays a supporting role for organizations like the China Association for International Friendly Contact, a part of the Chinese military intelligence apparatus that seeks to expand its network to retired U.S. military officials.
Inside China the United Front also has an important job to do: it is responsible for interfacing with the so-called eight democratic parties which are part of the Chinese People’s Political Consultative Congress, a symbolic advisory body to the Communist Party, which is supposed to demonstrate the popular legitimacy of the regime. It is also supposed to play a role in managing ethnic minorities. This combination results in the amusing scene every year in Beijing during the Party’s political conclaves, when officially appointed representatives of China’s minority groups arrive dressed to the nines in ethnic regalia—an ostentatious demonstration of the Party’s supposed inclusiveness—while Tibetans and Uyghurs in their home provinces complain of severe repression against their ethnic and religious customs.]]>

Australian Chinese Academic On Trial for Espionage in China

Yang has been held in custody since January 2019 after flying into the southern Chinese city of Guangzhou for the Lunar New Year. He was placed under investigation for allegedly harming China's national security, but was later charged with spying, although officials have given no specific details about his alleged crimes.