Epoch Times A secretly recorded phone call by a group that investigates human rights abuses in China may shed light on a crucial question: did a former leader of the Chinese Communist Party directly order the genocide, by cruel and unusual means, of a religious group? In the year 2000, a remarkable thing began happening in the Chinese organ transplantation industry: organ transplant rates shot up, new transplant centers were opened, and a flush of websites offered turnaround times of as little as one week for the transplant of a vital organ, something unheard of in developed countries, where waiting times for livers and hearts are often measured in years. [caption id="attachment_2010" align="aligncenter" width="800"] 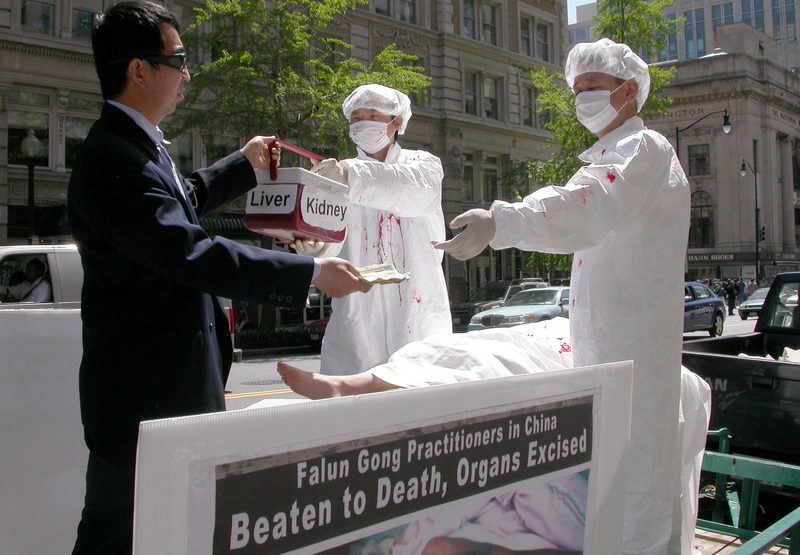 Falun Gong practitioners act out a scene of organ harvesting from their fellow practitioners in China. (The Epoch Times)[/caption]

For a time, this was puzzling. China had no voluntary donation transplantation system (as in developed countries) and it was generally understood that all transplant organs came from executed prisoners—that is, people convicted of crimes and sentenced to death. In China, their organs were simply scooped out and sold. But unlike the transplant rate, the execution rate did not suddenly rise in the year 2000. In fact, data from Duihua, a China-focused human rights group, shows a general decline in executions over the years. Years later, starting in 2006 and 2007, researchers figured out what accounted for the sudden boost in transplants: a new, different source of organs had come online in 2000—those harvested from practitioners of Falun Gong, a spiritual practice. Falun Gong, a traditional system of meditative exercises and moral teachings, had achieved enormous popularity in China through the 1990s. In July of 1999, however, the Chinese Communist Party leader at the time, Jiang Zemin, initiated a campaign to violently eradicate the practice. It had become so popular so fast that Jiang saw the group as a threat. He saw the persecution of it as an opportunity to boost his power in the Party. Based on hospital data, witness statements, secretly recorded telephone calls, blood tests, and a battery of other evidence, researchers saw that beginning in 2000, Falun Gong was becoming a useful and major source of organs for China’s transplant industry. Falun Gong organs fueled the massive growth of hospitals and dedicated transplant centers that did a booming trade in human organs, some of which were sold to foreigners for upward of $100,000. Alongside the evidence, a nagging question all along has been whether this practice spread so quickly across China because of local-level “entrepreneurship,” or because there was an order from the top.

In the absence of any documentary proof, the default thesis has been that the process was “organic,” in the mordant phrase adopted by Ethan Gutmann, whose book, “The Slaughter,” is devoted to a close examination of the question of harvesting from Falun Gong. But there is now a telephone call—secretly recorded—which appears to show a high-ranking Chinese military official providing a frank acknowledgement that rather than being a bottom-up instance of malfeasance and profit-seeking that spread quickly, the killing of tens of thousands of Falun Gong practitioners for their organs was in fact an instruction from the top. From Jiang Zemin himself. “At the time, it was Chairman Jiang. There was an instruction to start this thing, organ transplantation,” said the official. He repeated that Jiang (who was at the time chair of the Central Military Commission, the Party body which directs the military) had “I heard gave an instruction … to sell kidneys, do operations …” Bai is advised that his investigator heard that “the Joint Logistics Departments had detained a number of Falun Gong people as live donors, is that true?” Bai says: “This, this is back then, ah, I think, at least this is how I remembered, because back then after Chairman Jiang issued the order, we all did a lot of anti-Falun Gong work.” He added: “We directly control the military medical universities, they are directly affiliated with the PLA General Logistics Department, and they received repeated orders, because Jiang paid a lot attention to this matter back then, put a lot of emphasis on this matter.” The caller asks, “Who put a lot of emphasis on this matter?” Bai says: “Jiang, it was when Jiang was in power.” The call goes for several minutes. The voice is unmistakably that of Bai Shuzhong, former minister of health of the People’s Liberation Army General Logistics Department. As a well-known military official, videos of his speeches are widely available online for comparison. The voice in the recording and that of Bai Shuzhong are identical.

How a guerilla investigative team managed to get him on the phone, and even quickly begin discussing such sensitive political information, is another matter. Wang Zhiyuan, the New York-based spokesperson for the World Organization to Investigate the Persecution of Falun Gong, a research outfit that digs up and compiles evidence of abuses against the spiritual practice, and the group that made the call, would not allow a reporter to speak with the individual who made the call. This was because, he said, it would compromise the caller’s identity. Wang would not say whether or not the individual was inside or outside China. But he said that the method they used had been honed over many years, and was pulled off with the assistance of sympathetic insiders who leak information to their group. Specifically in this case, the caller pretended to be a high-level Chinese official who was investigating the matter. “It was the identity of a superior official—someone that Bai Shuzhong had to answer to, and someone who he was afraid of.” Why didn’t he know their voice? “There are many high-level officials in China. They had not met.” Wang said that they carefully research information about targets and those they impersonate—sometimes the efforts fail and the officials become suspicious and hang up the telephone. Other times they speak, seemingly freely. If Wang were challenged on the authenticity of the call, he said that his organization could provide to an international court or other authority detailed telephone logs showing that the call was actually made, as well as the number called from and to. Other calls they make go through official switchboards in China, featuring interactions with switchboard operators and the like, none of which, Wang said, could be faked. He said that WOIPFG could not release that information now because it would compromise their ability to use such techniques again. Besides, he remarked, “If we faked this, wouldn’t Bai Shuzhong come out and prove us wrong? That would be easy, wouldn’t it? Why haven’t they said anything?”

Xi Jinping, the Communist Party leader, is currently conducting a sweeping purge of the Party apparatus and the military, and it is clear to observers that many of his targets are officials associated with Jiang Zemin, the former leader. In this context, it seems understandable that an official who sincerely believed he was being questioned by a military investigator, or similar, would rat on Jiang. This style of leading questioning, however—where possible answers are contained in the question—did not sit well with David Matas, a Canadian rights lawyer who co-authored a notable report and book on the Party’s harvesting of organs from Falun Gong. “It’s plausible information, but not verifiable information. It’s the kind of thing that is of interest,” he said in a telephone interview. Matas added: “As far as I’m concerned, evidence of killing Falun Gong for organs is pretty convincing, and we know that it’s public record that Jiang initiated the persecution against Falun Gong.” The call by itself doesn’t establish whether those crimes took place—that’s already been shown, Matas said—but “tells us maybe some of the mechanics of how it happened, what drove the practice.” Matas regarded the telephone call as suggestive and potentially “damning,” though not by itself “iron clad.” He added: “I wouldn’t put it past Jiang Zemin to make the order, as part of his character … he was a great murderer.”]]>

Dr. Yiedi Yeh Addresses the Gap Between the Chinese Communist Party’s Official Rhetoric and its Actual Persecution of Christian Churches