<!–[CDATA[By Yves Dumas, the Tuidang Center
At different times in history, slavery in China was abolished by the Emperor — the 14th century, the 18th, and again in the 20th. When the Chinese Communist Party (CCP) took power in 1949 slavery was reinstated on a never-before-seen industrial scale in the form of ‘reform through labor’ camps, called ‘laogai’ in Chinese, the CCP’s equivalent of the Soviet ‘Gulag’.
The number of detainees in the labor camps is unclear. In 2008 an NGO estimated that more than a thousand camps are operating and contain between 6 and 7 million prisoners.
The CCP has often tried to obscure the existence of the labor camps. In the 1990’s, it re-designated the camps as “prisons.” The conditions, though, didn’t change. 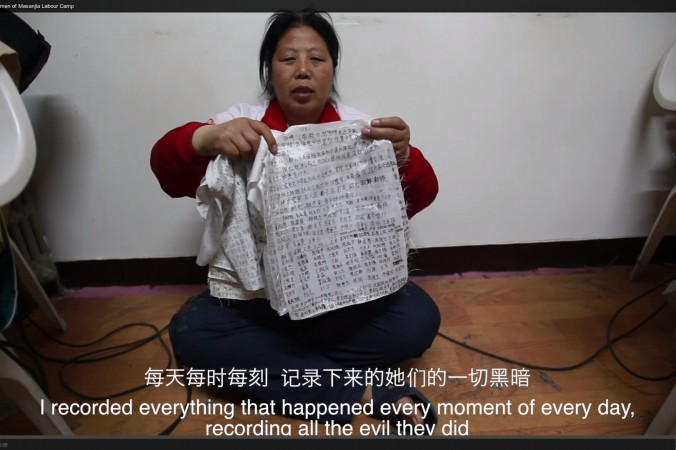 Josh Gelernter gives us a glimpse of the cruel conditions in his article in National Review Online, “Our picture of life in the laogai is murky, but here’s what has been reported: The prisoners are given uniforms and shoes. They have to purchase their own socks, underwear, and jackets. There are no showers, no baths, and no beds. Prisoners sleep on the floor, in spaces less than a foot wide. They work 15-hour days, followed by two hours of evening indoctrination; at night they’re not allowed to move from their sleeping-spots till 5:30 rolls around, when they’re woken for another day of hard labor. Fleas, bedbugs, and parasites are ubiquitous. The prisoners starve on meager supplies of bread, gruel, and vegetable soup. Once every two weeks they get a meal of pork broth.”
In communist China one does not have to be a criminal to enter the laogai system. Real criminals are held together with ‘thought criminals’ guilty of opposing communism, promoting freedom, or practicing religion. Even a conviction by court isn’t really necessary. Chinese law permits the police to hold anyone for four years before judicial proceedings. However, since the legal system is totally controlled by the CCP, it’s doesn’t really matter if one does appear before a court or not.
The laogai camps are estimated to have held between 40 and 50 million prisoners since they opened in 1949. Jean-Louis Margolin writing in ‘The Black Book of Communism’, which describes the history of repressions by Communist states, claims that perhaps 20 million have died in the prison system.
In the 2008 Human Rights Report the U.S. Department of State estimates that as much as half of China’s reeducation-through-labor camp population is made up of Falun Gong adherents.
According to an article published in Human Events by Michael Chapman, a large proportion of Chinese exports originate in the camps — a quarter of China’s tea, tens of thousands of tons of grain; “ . . . prisoners mine asbestos and other toxic chemicals with no protective gear, work with batteries and battery acid with no protection for their hands, tan hides while standing naked in vats filled three feet deep with chemicals used for the softening of animal skins, and work in improperly run mining facilities where explosions and other accidents are a common occurrence.”
Josh Gelernter states “A quick Internet search will yield photos of notes slipped into Chinese products on sale everywhere from Kmart to Saks. Notes begging for help, signed by Chinese slaves. One that turned up in Northern Ireland says, “We work 15 hours every day and eat food that wouldn’t even be fed to pigs and dogs.” It was written in Chinese; one that turned up in Oregon was written in English. “People who work here have to work 15 hours a day without Saturday, Sunday break and any holidays. Otherwise, they will suffer torturement. . . . Many of them are Falun Gong practitioners, who are totally innocent people and are detained only because they have different believe to CCP. They often suffer more punishment than others.”
This note originated from the infamous Masanjia labor camp. According to a former Masanjia inmate interviewed by the New York Times: “Sometime the guards would drag me around by my hair or apply electric batons to my skin for so long the smell of burning flesh would fill the room.”
Rumor has it that many of these slave labor camps are run by the PLA, the Chinese military.
In 2013, Chinese Premier Li Keqiang declared the ‘reform through labor’ system would be abandoned and the camps would be closed. More than a year later this so-called reform seems to be only cosmetic, as many labor camps have simply changed their name to, for example, ‘addiction treatment center’.
Lu Chen writes in the Epoch Times: “As labor camps close, other alternative systems have kept on functioning to detain, torture, and brainwash Falun Gong practitioners and other prisoners of conscience.”
“It is common for the Chinese Communist Party to make an apparent change on the surface to help bolster its image, while behind the scenes, it’s business as usual,” said Levi Browde, executive director of the Falun Dafa Information Center.]]>

The European Parliament on Xinjiang: China  Is Guilty of “Crimes Against Humanity”

Ideological and information warfare “is the most important thing that can be done right now,” Gertz,  national security correspondent for The Washington Times and author of the book “Deceiving the Sky,” said Bill Gertz

RSF Calls on WHO to Open its Events to Taiwanese Journalists

The European Parliament on Xinjiang: China  Is Guilty of “Crimes Against Humanity”