Amid Failed Promises of Reform, US Companies Leave China

Failed dreams and broken promises are all that remain of the hope that led the United States to open free trade with China in 2001. President Bill Clinton had told a crowded room a year prior that “if you believe in a future of greater openness and freedom for the people of China, you ought to be for this agreement.” The decision had bipartisan support, and leaders in the United States shared the belief that with the fall of the Soviet Union trade with China would help it move to democracy and freedom. [caption id="attachment_1957" align="alignleft" width="467"] 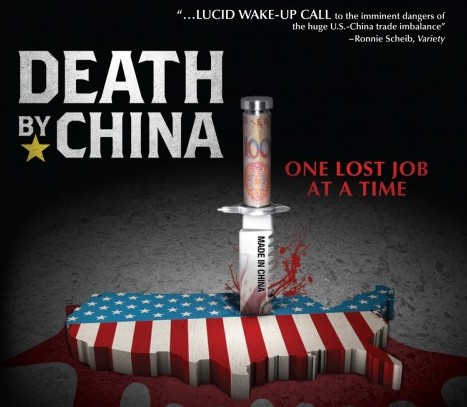 The poster for documentary film “Death by China.” The film’s director, Peter Navarro, says that U.S. companies are now pulling out of China amid an increasingly hostile business environment. (DeathByChina.com)[/caption] Rather than China becoming more free and democratic, many U.S. and Western companies have instead bowed to China’s interests, and many others have faced severe economic harm. Open trade “didn’t make them more democratic,” said Peter Navarro, director of the film, “Death by China.” Instead, “it made them a more efficient authoritarian machine.” But now, a change may be happening. Many large companies have begun to feel the impact, and many are now pulling out from China. Best Buy announced on Dec. 4 that it would sell its 184 stores in China and leave the country. It now joins other companies that left China, including Google, Home Depot, Metro, Media Market, Adidas, Panasonic, Rakuten, Nestle, and Danone. The timing is relevant. The Chinese regime will celebrate the 15th anniversary of its ascension to the World Trade Organization in 2016, and lawmakers in America are now looking at the harm open trade with China has brought to the global economy.

“They came in and wreaked havoc on the American economy and the European economy,” Navarro said. The problem, Navarro said, is that the WTO and the “most-favored-nation” status are meant to bring along a system or rules for free trade. When China was granted these benefits, however, it has used the rules and standards to boost its own trade, yet has not been following the rules when dealing with other nations. “They reap all the benefits of international organization, but they don’t abide by the rules,” Navarro said. China’s abuse of its new privileges began immediately. According to Navarro, as soon as the Chinese regime was brought onto the WTO it began flooding the United States with illegally subsidized imports. To top that off, the Chinese military is launching near-constant cyberattacks to steal intellectual property from American companies and is using counterfeits and piracy to undermine U.S. firms. An estimated 15 to 20 percent of all products made in China are counterfeits, according to a report from MIT Center for International Studies, and close to eight percent of China’s GDP comes from counterfeit goods. Then there’s China’s currency manipulation—its devaluing of the yuan, which gives China a 25 to 40 percent advantage on the U.S. dollar. Navarro said the effect of China’s currency manipulation is that it gives China’s imports to the United States a subsidy, yet puts a tariff on U.S. imports to China. The effect is that it makes it very easy for China to sell to the United States, yet makes it very costly to sell back to China—and the long-term effect is that Chinese companies dominate the market while U.S. companies get priced out. Even the numbers on China’s economy are shaky. Fortune Magazine recently reported that China’s stock market is soaring, yet the country is having slower growth and a housing bust. It’s description is that “China’s stock market is not so much defying gravity as defying logic.” For those keeping tabs, Navarro said, the United States has lost close to 57,000 factories, 25 million Americans are unable to find decent work, and the United States owes a $3 trillion debt to the world’s largest totalitarian nation. Ohio’s The Blade recently reported that trade with China since 2001 has cost 106,400 jobs in Ohio, alone. And to top it off, the Chinese regime continues to abuse its workers, is growing its increasingly hostile military at an alarming pace, and U.S. firms have been punished in its anti-trust probe. “It’s a tit-for-tat world and that’s part of the deal,” Navarro said, regarding how the Chinese regime has punished U.S. firms over political issues.

China’s stream of abuse seems to be taking its toll, however, and has eroded trust of U.S. firms and government officials, alike. A survey released on Sept. 2 by the American Chamber of Commerce showed that 60 percent of U.S. firms in China feel less welcomed than before and 49 percent believe they are being singled out by the Chinese regime for attacks. In a related poll in Europe, 61 percent of foreign companies that have been in China for more than a decade said doing business in China is becoming more difficult. The only industry the United States enjoys a decent trade surplus with China is agriculture, according to the U.S.-China Economic Security Council’s 2013 report. Yet, even in agriculture, the report warns, China has been using a substantial amount of trade warfare that has experts questioning its true cost. There is now a growing call for China to start playing by the rules, and Best Buy’s recent pullout could very well tell of what’s to come. “Today I am calling on China to fully comply with all of its World Trade Organization commitments and fully and faithfully implement all of the WTO rulings against it,” said Senator Sherrod Brown, chairman of the Congressional-Executive Commission on China, during a Jan. 25 congressional hearing on China’s compliance with WTO standards. Brown cited recent data that “paints a sobering picture of the Chinese state’s efforts to intervene in the economy and unfairly help Chinese businesses, despite its WTO commitments not to do so.” He pointed out that in 2012, the U.S. trade deficit with China was over $300 billion, and a similar number was expected in the 2013 figures. Brown said, “These massive trade deficits are unacceptable and cost jobs in places like Toledo, Akron, and towns and cities all over this country.” According to Navarro, as the impact of China’s admission to the WTO becomes more clear, companies and U.S. officials are now alert to the problem. William Reinsch, former undersecretary of commerce for export administration under President Bill Clinton, was once a leading voice supporting U.S. trade with China, but even he has changed his tune. “It is a real disappointment for me to write these things,” Reinsch stated in a recent report, according to the Washington Free Beacon. “I have always been an optimist about the relationship, but that view is becoming increasingly untenable, as China asserts itself in ways that are inevitably going to bump up against our interests in the region and in multilateral fora.” For the U.S. companies now pulling out of China, Navarro said, “it’s a simple cost-benefit analysis: the cost is rising, the benefits are going down, and the risk is increasing.”

House Church Under Attack in Guiyang